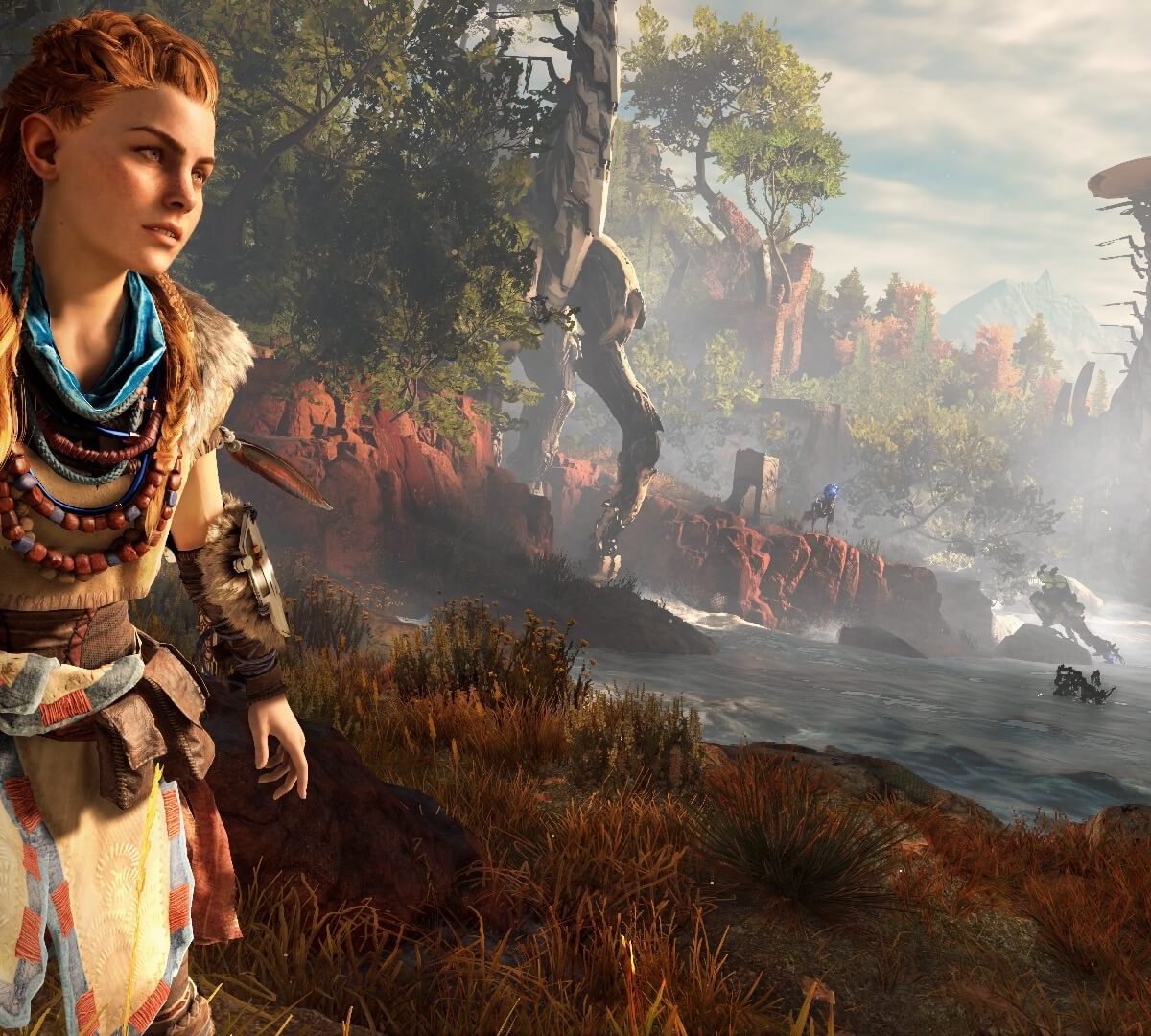 Sometimes a brand new game drops in the league and boom, it gets recognized as one of the best games launched. Horizon Zero Dawn is amongst those games and gives a truly new type of gameplay that is loved by everyone. Bringing to you some really terrifying futuristic creatures, lores, and storyline questions that you have in your mind getting answered slowly inside the game. Here is our Horizon Zero Dawn Review and let’s get started with it.

Yes, Horizon Zero Dawn is a mysterious game and requires you to solve it. There is a protagonist Aloy who questions everything ranging from the new world, futuristic technologies, and what is the center of all this?

Your main character Aloy is inside a really wide world and that world is further filled with fighting machines. Around 26 different species of animal-like fighting machines are in the land which you have to be aware of.

Each of these species has its own set of weak points that you focus on and attack, giving you a better chance of killing them. Besides, unlike the other games, when you focus on a single weak point the fight’s outcome and the pattern vary, which gives this game an edge.

You are playing with a character named Aloy, which is a unique character herself. She is heroic in nature and has a really big heart, while sometimes there are even some funny moments with other characters.

The combat of Horizon Zero Dawn is simply marvelous. A combination of the old Cavemen era and futuristic species gives this game a unique stance. Your character has a Bow and Allow with her while fighting huge futuristic fighting war machines.

But, your Bow and Arrow are not the simple ones, rather there are some extras to the Arrow which give you specific abilities, like temporary freezing, doing explosions damage, and such.

Animal-like machines, on the other hand, have characteristics of animals. Like the alligator which swipes its tail to hit you and throws the blasts of ice from its mouth. The Tigers also have a charge attack and require you to roll often, making it look like Dark Souls.

Just as I mentioned, your main weapon is your Bow and Arrow which can be upgraded with elemental things. Further, you can combine the Bow and Arrow with your concentrate skill to slow time and go for the dead-eye to do nice damage to enemies.

There are other weapons in the game as well like;

The most fascinating thing about the game is that the enemies are always in packs and when you blindly jump into the enemies, they are going to dominate you. You need to play silently and take the right opportunity to strike.

This is where the stealth mechanism comes into play, there is large grass of red color and a stealth kill opportunity as well which can lend you a hand over the enemies.

Or, you need to simply look for the critical points on the enemies to strike, like the eyes to quickly escape or damage them.

Horizon Zero Dawn is an incredible game with a new type of design and gameplay that mixes both the Cavemen type fighting style and the futuristic war machines that look like animals. Considering the game is not as easy as it seems, you have to give your best and play with brains to kill enemies with stealth, critical points, and equipment. Furthermore, the story of the game is amazing where you question everything and find the answer yourself. So, Horizon Zero Dawn is definitely a must-play in our opinion and you should try it either on PS4/PS5 or even on PC.