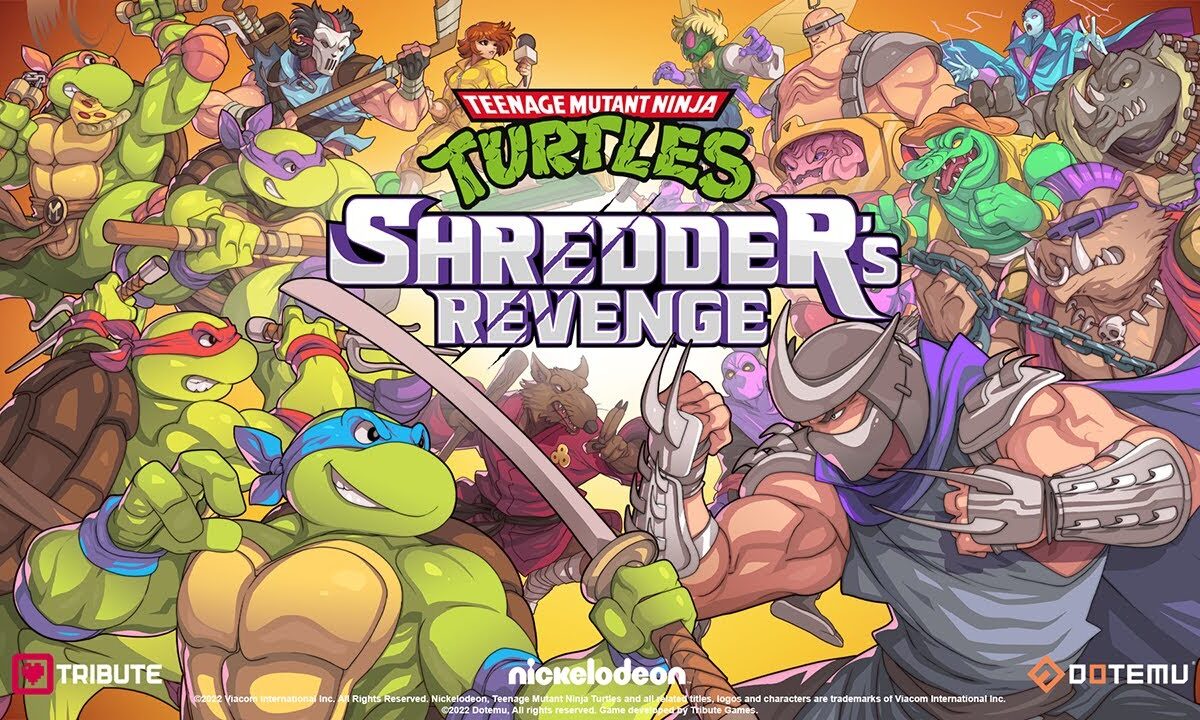 When it comes to old arcade games, the Teenage Mutant Ninja Turtles franchise gave us many hits that we sunk hundreds of quarters into. Not only were they very fun to play, they were very challenging and forced us to become better gamers over the years.

As the era of arcade gaming ended, so did the lucky streak that the TMNT franchise had. It’s been a rocky road for TMNT games, especially when it comes to the 3D games that were often based on TV shows and movies. The last notable release, Mutants in Manhattan, was unfortunately met with a less-than-favorable reception.

Fortunately, genre of 2D side-scrolling beat ’em ups was revitalized by Dotemu with the release of Streets of Rage. And as the TMNT license was taken away from Platinum Games, Dotemu managed to get their hands on it and assigned on the development of a new game.

Finally, Teenage Mutant Ninja Turtles: Shredder’s Revenge was announced and after a wait of many months, it’s finally released.

At a first glance, you can tell that Shredder’s Revenge tries its best to emulate what made the arcade classics so great. But what’s even better is that it seems to have needed improvements to modernize the experience too, both visually and in terms of the gameplay.

So, let’s charge up our Turtle Power and jump into the action to see if TMNT: Shredder’s Revenge lives up to the hype!

The gameplay of Shredder’s Revenge is exactly what it should be like. It takes notes from the classic arcade games and includes all of the cool bits. For example, there are two types of stages in the game that you play through, which include simple side-scrolling and those that put you and your enemies on a hoverboard.

If you remember the classics, that’s exactly how it worked in them too. But the game does not try too hard to be a revival and instead has its own identity as well.

First of all, the difficulty in the game is very balanced. The turtles are given several ways in which they can charge attacks, perform uppercuts, and even dodge enemies if they time their movement right. Which is a big contrast to how overly challenging the classics could be at times.

The gameplay itself feels very excitingly fast-paced as you can use a lot of different moves to fight enemies. And you fight waves of them at all times, so you hardly get the time to breath.

With such intense gameplay and multiple characters to play as, Shredder’s Revenge reminds of why you fell in love with arcade games to begin with. And even for newcomers, it’s a great place to start because the game is modern enough to win younger people over too.

Last but not least, while it’s very fun to play by yourself – it supports up to 6 players at a time! It’s the perfect party game that you need both for couch and online co-op experiences. Did I mention that you can play as non-Turtle characters too?

A delight to the senses

Teenage Mutant Ninja Turtles: Shredder’s Revenge is amazing both in terms of the visual design and the kick-ass soundtrack.

The graphics of the game are a perfect mixture between the classic TMNT games and fluid modern-day animation. Every playable character and enemy looks distinctively different to each other, which is very helpful when you have 6 players on the screen at the same time.

The textures are beautiful, the backgrounds have a great cartoonish feel to them, and the art-style is appealing for both children and long-time fans of the series.

The soundtrack on the other hand is very fun to listen to and includes tons of instrumental and vocal tracks that include some interesting artists. And by interesting, I mean there’s a track made by Ghostface Killah futured in the game.

Whether you’re a fan of the old arcade games or just someone who likes Teenage Mutant Ninja Turtles from the comics/cartoons, you’ll find a lot of easter eggs spread throughout the game. These can be found as collectibles, placed carefully around the stages, or even in smaller things like animations that you can use when fighting enemies.

And the game does a perfect job of reflecting the individual personalities of the characters as well, since you can see Donatello play games on his Gameboy while Mikey has a hilarious running animation.

All of these details bring the game to life, and when you combine it with the amazing gameplay, it’s the TMNT experience you were waiting for all this time!

Teenage Mutant Ninja Turtles: Shredder’s Revenge is an excellent addition to the AAA revival of classic 2D beat ’em ups. And it’s a great return to form for the TMNT franchise which has had far too many misses in the video game department.

The graphics are beautifully animated, the gameplay is exciting and extremely fun, and there’s a perfect mixture of honoring the past while still opening doors to present for people who will be playing a TMNT game for the first time in their lives.

Of course, the game is not perfect and could have used a tiny bit of additional variety between its 16 levels – but that’s easily forgivable when the game is a wild ride from start to finish otherwise.